We created the OutagesIO Internet outage tracking service and software because we were frustrated with our own business Internet connection.  It was hard to prove we were having issues with our Internet.  Sometimes by the time we called tech support, the outages had resolved or couldn’t be seen at the provider’s end.

We developed a tool that can be downloaded and installed in less than five minutes. Because it automatically tracks and monitors Internet problems, you can see when and where you are having Internet outages. Plus, you’ll know if the problem is at your end or with your ISP provider. It is especially helpful for connection issues that happen off and on, making them hard to troubleshoot. 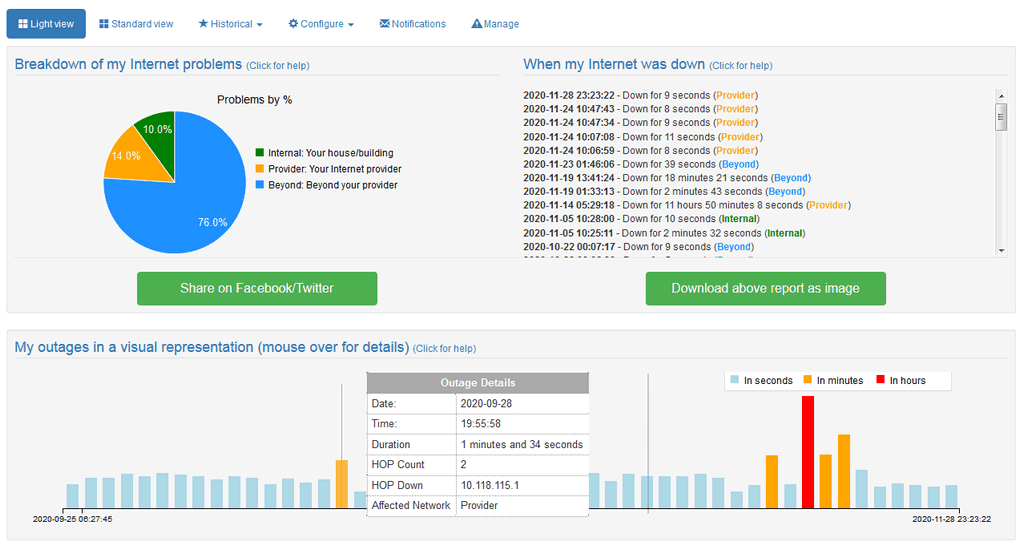 OutagesIO can be used by practically anyone, no matter their technical level. The reports show easy-to-understand events and the dashboard can be switched because a Light view and a Standard view. The Standard view is often the default one used by IT people that need to dig a little deeper for more details that can help them with customers and remote locations.

The software runs on Windows, Linux, ARM and OpenWrt. Or, if you’d like to make sure you never miss any data, our low-cost hardware agent runs 24/7 and monitors your connection even when your computer is turned off. Plus, the hardware agent lets you troubleshoot wireless Internet services along with LTE, 4G, 5G.

Check out our live demo

If you’d like to see an actual running agent and its ongoing reports, check out our live demo page.

Get started with our free outage monitoring software

If you want to jump right in and download the free software app for outage tracking, just head for the app.outagesio.com sign up page.

While anyone can take the time to start learning about microchips, wireless devices, building firmware, soldering and everything else involved, many simply don’t have the time yet, would prefer to use safer hardware. That’s where IoGadgets comes in.

IoGadgets is a spin-off from OutagesIO. We first built it to give our members a way to control devices at the same location as they are monitoring the Internet. Once everything was built, we thought other folks might not care to monitor their Internet but may want to  remotely control smart home devices.

As we move forward, we’ll be adding more hardware and features as requested or that we find interesting to build.

The Echo Networks name is new but our online history dates back to the late 80’s.  My name is Mike Paradis and I’ve been offering online services for much of my life. My online adventures started around 1987 by building a resume sharing system on a network called Datapac. The service would provide colleges a way for students across the country to share their resumes and employers to have a wider selection of potential candidates, unheard of at the time. 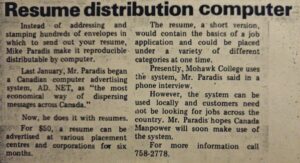 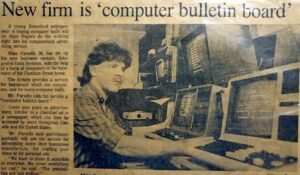 That turned into offering a BBS (LiveWire Online) around 1990 that would grow to 200 lines (InaSec.ca). At one point, I decided to connect the BBS to the Internet and it didn’t take long before that turned into becoming an ISP. Initially, Internet access was via slip/ppp services running on 486 machines then access was via Cisco dial up servers and other hardware.

Fun fact: there were no Linux installers back then. It took over 40 diskettes to build the operating system. 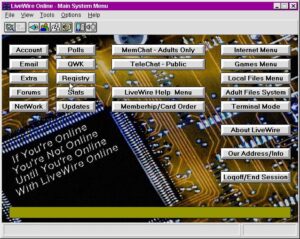 It didn’t take long for the wonders of the far reaching Internet to take over the BBS, naturally moving me into becoming an Internet service provider or ISP, NewForce.ca. We offered dial-up and dedicated Internet access which lead to a government contract, initially with the fisheries department.

While offering Internet access, we started developing digital recording devices, live Internet broadcasting and were looking at how we could start offering wireless access and scouting antenna locations.  Around 1999, large telcos like Bell and cable system operators started driving us and other ISP’s out of business by undercutting our prices while we still had to buy their infrastructure to sell to our customers. We were lucky enough to get out while there was still a market and sell our user base to a national ISP. 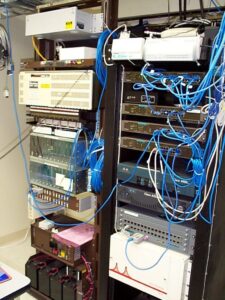 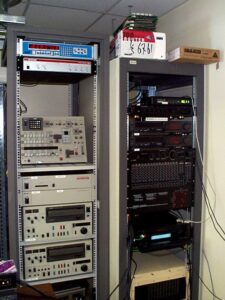 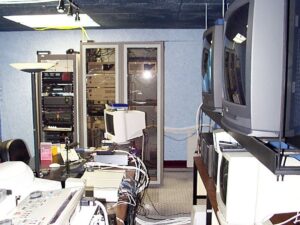 Around the year 2000, after closing the ISP business and moving, I still had a lot of hardware and was trying to repurpose some of it. I decided to start working on my own search engine project. As I love to build things on my own as much as possible, I simply got to work.

From power to cooling to the equipment room I would need, I put everything I would need together and started building my search engine. The plan was to start with 96 nodes and expand from there. Then the dot com bust came. 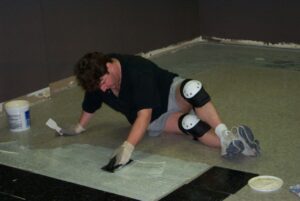 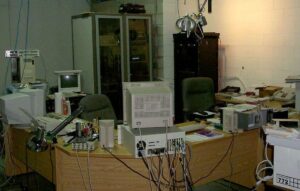 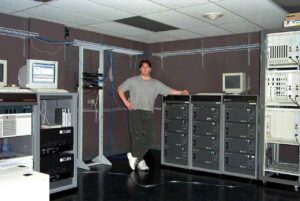 Since our new home was in a well connected area, I converted our basement into a development environment to learn more about various technologies, hoping to find my next project along with continuing with my search engine. I wanted to learn more about cluster and grid computing so built a GFS network to better understand shared storage access. The search engine used GFS storage.

While learning, my wife and I decided to start Logicore Networks, a managed services offering, since I had built up a lot of resources. She (seen in the image, yup, she’s a tech geek too) joined local business groups and we started selling VoIP and centralized, managed services including virtual office solutions. 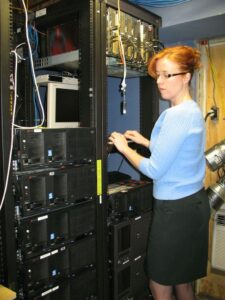 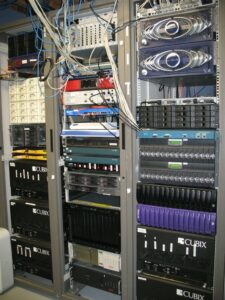 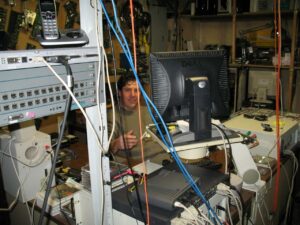 While building services for others, I always wanted to build my own SaaS but never got the opportunity. I eventually decided to start something of my own, OutagesIO, based on my own experiences of not only being an ISP/MSP but having to spend so much time fighting with ISP’s to give our customers reliable Internet services.

Building OutagesIO from scratch has been the most difficult project I’ve ever taken on. It consumed most of my time for many years then once built, consumes even more time trying to be found, seen on the Internet.

I now offer our services as Echo Networks LLC, which is mainly just the name I’m trying to centralize our business workings under in case I end up starting something new. Now you know a little about me, can dig up what ever information you’d like about my past and rest assured that I am not some fly by night operation.

I’ve gone through many name changes while offering online services and that’s because domains are incredibly hard to register these days. Squatters prevent new ventures from getting the best names that reflect their offerings so they have to settle with what ever they can find or some up with.

I’ve had to use names I didn’t like, eventually finding a better one, then begrudgingly having to change yet again when a better one came up, always trying to find names that better reflect the service.

By the way, I truly do care about Internet privacy and like all new sites/ventures on the Internet, struggle to have our service be found and used by those that would love to find us but are prevented by big tech and the monetization of the Internet.

I feel this is slowing innovation and creating a world that is owned by a handful of companies. When our services talk about not being interested in profiling, this is an honest statement by someone who is frustrated by what is happening.

Now, my team and I are working tirelessly on the following services which we hope can help Internet consumers and those who want a little more privacy when using smart home devices.